Thirty-second spots for this year’s Super Bowl reportedly cost $5.6 million. Last year, prices ran as high as $5.3 million, according to The Hill. Fox, the network airing the Super Bowl, said it has “run out of ad space.”

With such a hefty price tag, some marketers are worried that the political ads may overshadow their ads and squash the pre- and post-game buzz they’re hoping to generate. “Placement is going to be very important,” Harris Diamond told NBC News, noting some companies are concerned about the impact of following the political ads. Diamond is the CEO of McCann Worldgroup, which represents Verizon and Microsoft.

Fox has reportedly told marketers the political ads will be put in their own commercial segments. The network, however, did not comment to NBC News.

Below is a roundup of some of the ads running this year. You can also check out some Super Bowl ad teasers and ads that have already been released.

Facebook will run a 60-second ad featuring Chris Rock and Sylvester Stallone, its first ever Super Bowl ad. The spot will promote its Groups feature. So reports The Hill.

GM Bringing Back the Hummer with Help from Lebron

General Motors is reportedly bringing back the Hummer brand and using Lebron James to help do it in an ad that is set to run during the Super Bowl. So reports AdAge. James, for his part, has previously appeared in Kia ads. GMC brand advertising has been handled by Leo Burnett, but GM had not provided details about the Super Bowl ad or the agency handling it to Ad Age by the time the article was published.

The 30-second spot is directed by Roman Coppola, the son of Francis Ford Coppola. The commercial, produced by agency Wieden+Kennedy, will focus mainly on ketchup, but will feature a “cameo” from HoneyRacha, a new sauce that combines honey and Sriracha flavors. The spot is slated to run during the second quarter. So reports Fox Business. 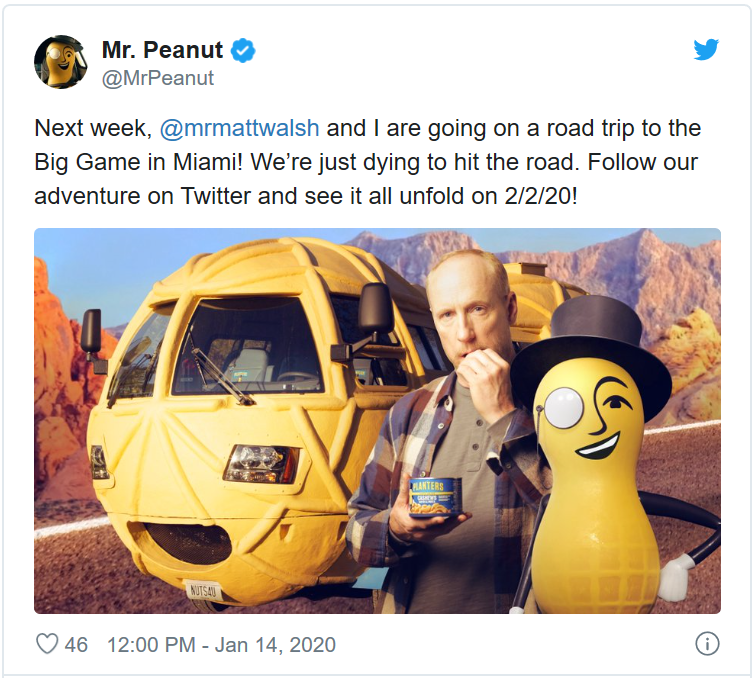 Planters is airing a 30-second spot featuring Mr. Peanut and actor/comedian Matt Walsh, who plays Veep’s Mike McLintoch. It will be just Mr. Peanut’s second appearance at the Super Bowl. Mr. Peanuts’ official Twitter account announced that the duo would be embarking on a road trip to Miami. So reports I4U News.

Squarespace Returns After Skipping the Game in 2019

Squarespace will run a spot during the Super Bowl for the sixth time in its history, the company said in a press release. The website hosting company’s 30-second commercial spot will air between the first and second quarters of the game. Squarespace, which did not run a spot last year, made its Super Bowl debut in 2014. Past ads have featured Keanu Reeves, Jeff Bridges, and John Malkovich. Squarespace said its “award-winning creative is developed and executed in-house.”

Verizon has confirmed its upcoming Super Bowl spot will highlight how 5G can become a valuable tool for firefighters and other first responders. Verizon also ran spots for the campaign during the AFC and NFC championship games. One of Verizon’s teaser ads showed how firefighters may be able to “see through” smoke using infrared vision goggles, according to Media Post.

The 30-second spot from Goodby, Silverstein & Partners features MC Hammer and is Cheetos’ first Super Bowl ad since 2009. The ad is part of a campaign entitled “It’s a Cheetos Thing” and is being used to promote its recently unveiled Cheetos popcorn. So reports AdAge.

Olay’s ‘Face Anything’ Ad to Focus on Inspiring Women

Olay will run a Super Bowl ad inspired by 2019’s first all-female space walk. It is the second year in a row the skin care brand will run an ad during the Super Bowl. So reports Forbes.

The commercial has a space mission theme and features the hashtag #MakeSpaceForWomen. It has an all-female cast, including Lilly Singh, Busy Phillips, Taraji P. Henson, Katie Couric and Nicole Stott, a former astronaut. It focuses on female empowerment and opening doors to fields where women are underrepresented, such as science and engineering.

Anheuser-Busch InBev is cutting back on its Super Bowl ad buy, but is still planning four minutes of commercials during the game, including a 60-second ad featuring Bud Light and Bud Light Seltzer. So reports The Wall Street Journal. Last year the company ran five minutes of commercials. This year's levels are in line with the company’s traditional advertising for the big game.

Snickers Gets Back in the Game

Snickers is returning to the Super Bowl in 2020 after a two-year break from the big game. It’s the sixth Super Bowl ad for Snickers in the past decade. So reports I4U News. The spot was produced in partnership with BBDO New York and AMB BBDO.